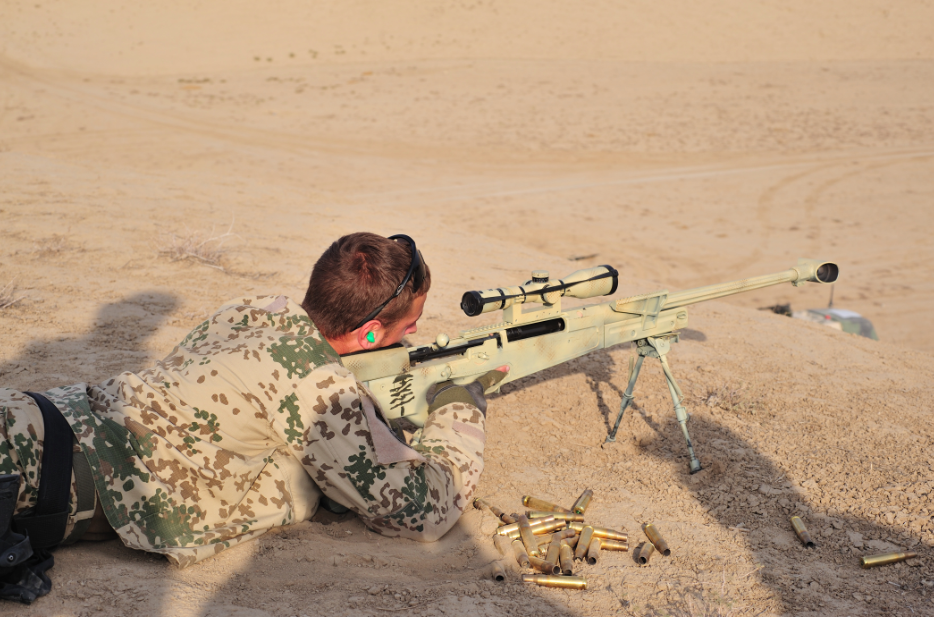 While not specialized skills per se, these vital functions deserve mention here. The team leader is an officer who leads the team both in training and during operations. The deputy team leader is usually a senior NCO with years of experience. He supports the team leader. Both are responsible for tactical leadership in the field, for ensuring that equipment is in good order, and for the welfare and readiness of their personnel.

Sharpshooters and snipers support their team during combat operations by engaging selected targets with precision fire from concealed positions. They usually operate in two-man firing teams consisting of a shooter and a spotter. Their most important task is reconnaissance. To this end they are specially trained in the use optical surveillance equipment and in communications. Since SOF units are quite small, their sharpshooters and snipers are frequently forced to work without a spotter. This increases both their stress-load and their responsibility. They are the most important operational tool of the team. They undergo extremely intense training because their mission and their equipment are very complex.

Breachers are trained to force entry using demolition charges or firearms (e.g. shotguns). Targets include doors, walls, windows, ship’s hatches or hulls. This requires very precise application of explosives or firearms. Collateral damage and casualties are to be avoided.

The EOD specialist is capable of assessing explosive threats including IEDs, evaluating the options for their disposal, and advising the team leader regarding threats and options.  He is capable of evaluating a location for its EO/IED threat potential, and is familiar with types of explosives and materials suitable for bomb-making. He also assists in on-site destruction of cached ammunition and weapons.

The SOTAC / FAC is first and foremost a communications specialist capable of communication with land and sea units, manned aircraft and UAVs. He advises the team leader and acts as a forward observer to direct tactical fires (by artillery, aircraft, and UAVs) onto target.

The combat medic is trained to apply advanced emergency lifesaving techniques. He is in constant contact with and coordinates with in-theater medical facilities to ensure wounded and injured personnel receive treatment within the “Golden Hour” (treatment within one hour is considered the primary factor determining the survival of seriously injured personnel). He coordinates medical evacuation of casualties from the field.

Securing intelligence via still and video cameras either in the course of reconnaissance or for documentary purposes (e.g. securing evidence admissible in court) is a secondary function. Team members are trained to carry out this function in addition to their primary speciality.

All special operators are trained in the fundamentals of Sensitive Site Exploitation (SSE)/ Tactical Site Exploitation (TSE). It is not a speciality, but a secondary task. Nonetheless there are Lead SSE/TSE Operators who are trained to gather targeted information through conversation with local residents, and in evaluation, categorization and documentation of secured evidence before passing it on.

The Unmaned Air Vehicle Operator is trained to support the team’s mission by operating a tactical drone.

The Vertical Insertion Operator is qualified to plan and supervise all forms of aerial insertion (parachute jump, Fast Rope, Repelling). This is a secondary, not a primary speciality. Because of the complex nature of the task and the need to adhere to special safety regulations when operating with aircraft, it remains a very important duty. 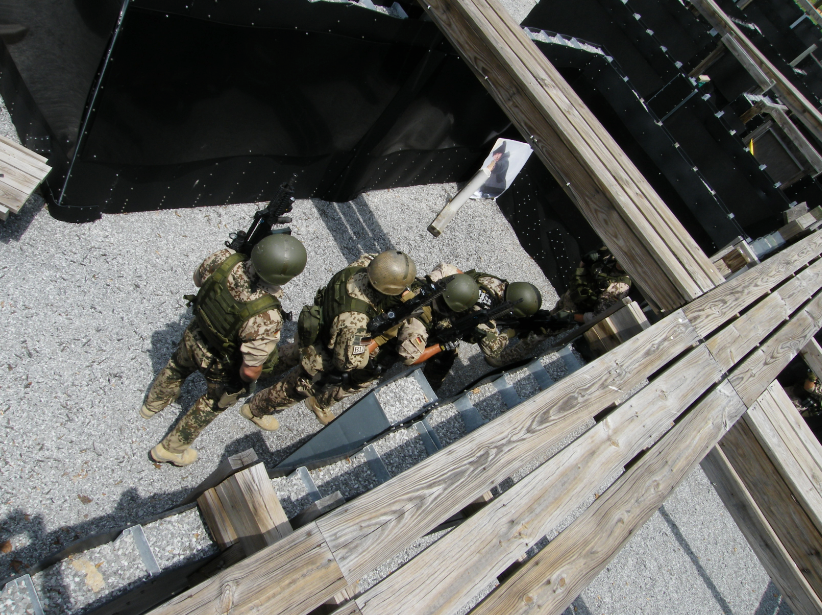 After three years of training, the time has come: certification as a Kampfschwimmer.

In a simple ceremony the new naval commando receives his insignia, his certification papers, and his unique Kampfschwimmer serial number. He is officially inducted into the Kampfschwimmer community – a community which still numbers a mere 300 members 55 years after its founding. The induction is completed when the inductee formally transfers out of the Training Company and reports for duty with the operational Kampfschwimmer Company under the eyes of all active duty Kampfschwimmer.   This simple ceremony seems to conclude training.

In fact, training is just beginning.

For the “New Guy”, a formative phase has begun. As in all units, he has to earn his position on the team. Basic skills acquired during formal training must constantly be demonstrated in more complex situations. The new member is expected to think and act in the context of the team, make his own contributions, and interact with his superiors. Self-sufficiency, application of forethought while carrying out orders, keeping eyes and ears open – in short, bringing all senses to bear when assessing a situation – are the prerequisite for successful operations within the team framework.

Since the “New Guy” hasn’t acquired a specialization yet he is assigned as the team’s machine gunner. This position is both physically and mentally demanding. As in other military units, the Kampfschwimmer teams employ machine guns as heavy weapons. Gunners can be assigned to picket and surveillance duty, or they can provide suppressive fire to support the team during operations. While machine guns are characteristically imprecise weapons, the Kampfschwimmer gunners are trained to use them for precision fire against selected targets.

Traditionally New Guys get stuck with all the unpleasant “housekeeping” jobs such as cleaning the building, picking up in the squad room, or packing equipment. The most senior team member supervises them and notes whether they display enthusiasm and thoroughness. These menial tasks don’t just build character, they also demonstrate it.

During this early phase the New Guys earn their nickname or “handle” which they will retain for the duration of their career. As in all special units, the handle is intended to protect the servicemember. He can be addressed during operations without revealing his identity.

As implied above, life is “interesting” for the New Guys. They are the first in every morning and the last out at night. They have to absorb knowledge and experience like a sponge and learn, learn, learn! The operations and training cycle – which can result in 200+ days away from base every year – will not be slowed down to accommodate them. If they don’t master a procedure during training hours they have to keep practicing on their own time, during breaks or after hours. The team leader will determine whether the new member will be retained in the team, and what (if any) specialization will be assigned.

If a commando is qualified he will be assigned a specialty. His preferences and skills will be taken into consideration. The rule is: if you enjoy a task, you will do it thoroughly! Depending on the chosen specialty the trainee will be assigned to national and/or international training programs. Career servicemembers usually qualify in several specialties over time. For example, communications specialists frequently move on to become forward air controllers. It is considered “normal” that Kampfschwimmer personnel not only complete the training programs they enter, but complete it at or near the top of the class!

These high standards are also reflected by the large percentage of Kampfschwimmer personnel or Kampfschwimmer candidates who are selected as the navy’s “Boatswain of the Year”. An intrinsic motivation is involved here: “merely” being assigned to the Kampfschwimmer Company does not guarantee that a seaman will be allowed to stay with the unit. Only the best among the newly qualified naval commandos will be granted career status. These facts reflect the standards which the Kampfschwimmer (and all special operations forces) apply to each and every member. The bar is deliberately set very high; in real world operations, mistakes are not an option.

The personal atmosphere in the relaxed is cordial but respectful. Unit members are on a first name basis or address one-another by their handle. Rank structure is observed, but experience ranks highly when it comes to planning and conducting operations. Performance and competence are respected, which means that qualified NCOs are tasked with planning and leading particular phases of an operation. This is especially true when a particular specialty is crucial to a phase. For example, the team medic takes the lead in planning (and if necessary, executing) medical evacuations. But at the end of the day, responsibility resides at the top. However an exercise or operation might end, the officers and team leaders carry the full responsibility.

The German navy’s Kampfschwimmer naval commandos are among the best Special Operations Forces in the world. The are trained for triphibian operations. They are at home on land, in the water and in the air.

Kampfschwimmer commandos also use the air for covert approach and mission execution. This includes conducting static-line, HAHO and HALO parachute jumps from fixed-wing aircraft, as well as fast-roping, rappelling, rescue-basket descent or SPIE-rig egress from helicopters.