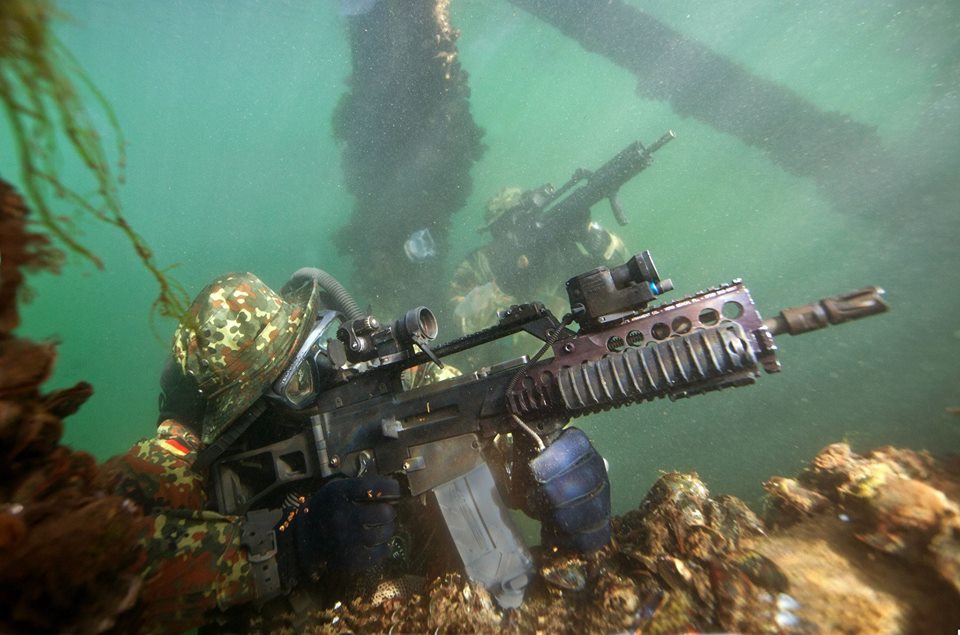 The shock of 9/11 2001 not only exposed the vulnerability of Western societies, it also identified the current threat which political institutions and the military need to confront head on.

In the course of the security policy debates and developments which followed the attacks in New York and Washington, the German Navy created a new unit unlike any other within the German armed forces. The Waffentauchergruppe was dissolved on 3 July 2003 and replaced by the Spezialisierte EinsatzKräfte der Marine (Specialized Operational Forces of the Navy), better known by their acronym SEK-M. It incorporated: command staff and logistics elements; the Kampfschwimmer Company; the Minentaucher or Mine Clearance Company; the Boarding Company; company-strength personnel forces for specialized naval operations; the training element for naval commandos, mine clearance personnel, and frigate-based boarding personnel; as well as four ocean-going vessels. In sum, the SEK-M became the central repository of capabilities which are unique not only within the fleet but withing the German armed forces overall.

Out-of-Area missions, which were still a novelty in the 1990s, are business-as-usual for the unit today. From its very formation – and  up until this very hour – members of the SEK-M have been constantly deployed, sometimes at the squad or team level, and occasionally at the task force level.  Little over a year after the unit stood up a new command and control policy for the German armed forces was introduced. The civilian and military leadership mandated a strict separation of command and control for conventional forces and SOF.

In September 2004 a separate SOF operations directorate was established in the German armed forces command staff; the doctrinal principles for implementing the new policies were presented in late 2004. On 15 March 2005 a joint top-level SOF Operations Command (Kommando Führung Operationen von SpezialKräften), best known by its acronym FOSK, was activated in Potsdam. This provided the requisite command structure for joint conduct and control of special operations missions at the operational level. In addition, the operational doctrine governing Kampfschwimmer operations was finalized. Within the framework of operational doctrine governing special operations forces, Kampfschwimmer responsibilities were formalized as: hostage rescue/ prisoner liberation missions; maritime missions; and the seaward portion special operations missions. The leadership structure for special operations forces was established in accordance with the applicable international standards based on NATO Special Operations Policy (MC 437). Responsibilities defined through the NATO Defence Planning Process and the European Headline Goal were also taken into consideration. For the naval special operations forces this meant, at the national level: maintaining the requisite readiness state and endurance capabilities to support the army’s KSK special operations forces in the maritime environment, in the course of “rescue and liberation” missions, and within the NATO and EU framework. Size, organization and capabilities of the force were prescribed, as were the three core mission areas for special operations units:

a) Special Surveillance and Reconnaissance

For the naval special operations forces there also remained the additional requirement of being able to infiltrate and exfiltrate the area of operations by sea, air or land.

Establishing FOSK Command gave the naval commandos the command and control structure required for conducting sustained special operations. It was the German equivalent of the US Special Operations Command. During operations it was directly subordinated to the Generalinspekteur of the German armed forces (equivalent to the Chairman of the JCS).

FOSK Command draws on the resources of the Army’s KSK and the Navy’s SEK-M to assemble mission-tailored operational SOF task forces, and serves as their national command and control element.  In addition to Special Operations Forces, these task forces can also include non-SOF tactical support units which have capabilities not embedded in the SOF units themselves. These augmentation units act as force enablers and force multipliers; frequently their contribution is essential in order to  empower the SOF to carry out the primary mission. In this way the navy provides a double contribution to the mission force. On the one hand they provide the Kampfschwimmer as SOF, and on the other hand they provide submarines, aircraft and ships to provide direct tactical support as well as other support functions. The demands which FOSK Command placed on the special operations forces is reflected in the Kampfschwimmer Company’s newly defined mission statement.

In accordance witt NATO doctrine, European Union (EU) defense policy, and national operational doctrine, Special Operations Forces (SOF) are to be used for operations which – because of their special nature, goals, and the significance of the targets – must be conducted according to different principles and methods than those employed during missions by conventional forces. Overriding considerations may call for the employment of covert operations and the willingness to incur significant risk. Because of the intense demands placed upon SOF personnel, special efforts are made with regard to their selection, training and organization. They utilize special equipment and tactics suited to their specific mission profiles.

* Special Reconnaissance and Surveillance: missions to gain specific, precisely defined and time-sensitive intelligence of strategic or operational significance and admissible as evidence in judicial proceedings.

* Direct Action (DA): offensive operations against point targets. These missions are clearly delimited in terms of operational space and mission duration. They are designed to minimize collateral damage. Mission goals can include destruction and sabotage, hostage rescue, seizure of materiel or of persons of interest, and physical occupation of the target location.

* Military Assistance: military operations to directly or indirectly improve the internal and external security and stability of recipient nations.

Because of their broad capabilities and mission-spectrum, special operations forces are viewed – both internationally and, in recent years, increasingly by Germany’s leadership – as strategically significant instruments of western security policy. The only tactical-level special operations forces within the German armed forces are the Army’s Special Operations Command (KSK – Kommando Spezialkräfte) and the Navy’s Kampfschwimmer. Ironically, the Kampfschwimmer have been in existence since 1959 but were not formally recognized as SOF until 2006, 49 years later.

On April 1 2012 the FOSK Command was transformed into the Operations Command. All ongoing military operations are now conducted under its auspices.

Today the Kampfschwimmer Company stands ready to apply is special operational capabilities with the maritime environment. The unit is also qualified for selected additional mission categories including maritime special reconnaissance, underwater tactical offensive operations, and opposed boarding operations (VBSS/ Visit Board Search and Seizure). They also augment the army SOF capabilities by conducting hostage rescue missions and capture of high-value targets in the maritime environment. Staging from ships and utilizing other seaborne platforms, the naval commandos can create the conditions which enable follow-on operations by army SOF. In this way the Kampfschwimmer also act as an additional link between the navy and the army.  Led by FOSK Command, the Kampfschwimmer Company has demonstrated its capabilities in such recent and current missions as ATALANTA (European Union anti-piracy operations), Operation Enduring Freedom in Afghanistan, or as part of the International Security and Assistance Force. Whether afloat or far from the sea, operating openly or in the shadows, the German naval commandos have proven themselves a robust mission asset.