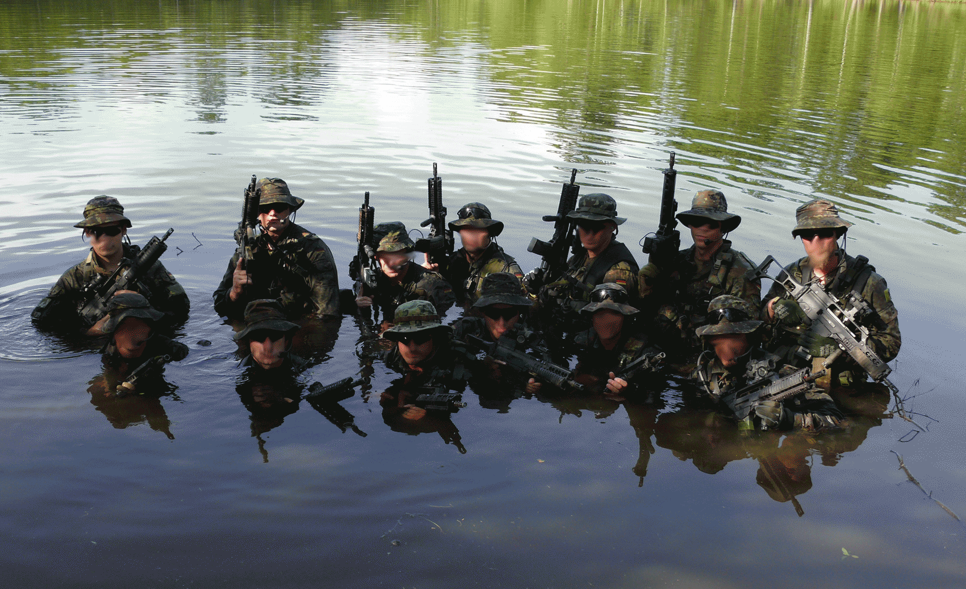 To master these mission categories, Kampschwimmer receive triphibian training. In other words, their operational environment includes the sea, the air and land. They are trained to traverse their operations zone above and under water (in boats, swimming, diving), through the air (aircraft or parachute), and on land (vehicles or on foot). Because of the enormous demands placed on SOF, the personnel is chosen with great care, then specially trained, organized and equipped.

Their training takes three years and includes military diving (where they learn to egress from submerged submarines and covertly approach their target over long distances); ranger training; survival training; and parachute training. They receive intense demolitions training, both for overcoming access barriers and for destroying important targets. They learn to use all weapons in the German armed forces’ arsenal as well as many foreign weapons (including those of potential enemies). To qualify them to safely operate utility vehicles, wheeled armored vehicles, quads and motorcyces, they receive special driver’s training as well as training in boat operations. Every successful graduate of Kampfschwimmer training is assigned to the Kampfschwimmer company where he receives specialist training, e.g. as a combat medic, sharpshooter, communications specialist or demolition specialist.

Because of this broad-based capabilities-/operational spectrum, Kampfschwimmer are constantly training, both within and outside Germany. This is necessary to retain their capability of deploying at any time, within hours of getting the call, to conduct any mission that falls within their capabilities spectrum. To ensure they can react on short notice the Kampfschwimmer have their own command and support elements as well as direct tactical support forces. The direct tactical support forces consist of a dedicated special boat unit called the Einsatzgruppe See (EinGrpSee) or “maritime operations group”.
The EinsGrpSee is composed of select recruits from the Boatswain’s Mate and Propulsion Engineering career fields. These sailors receive special training and equipment in order to qualify for the EinsGrpSee. Their boats include jet-propelled Rigid-Hull Inflatable Boats (RHIB), which are noted for their low draft, high speed, firepower, and maneuverability.

The Kampfschwimmer were established in 1959 and are Germany’s oldest special operations force. The Kampfschwimmer Company was activated as an operational unit in 1964. The Company has repeatedly proven its operational worth in recent and ongoing missions such as the European Union’s anti-piracy Operation ATALANTA, Operation Enduring Freedom, or as part of the International Security Assistance Force (ISAF) in Afghanistan. At sea or far inland, they have made a robust, visible (or invisible, as far as the enemy is concerned) operational contribution in the name of the German navy.